Portrait photography has a long tradition that over the years has been subverted by a multitude of photographers.  Still in many cases simplicity is not only key but also often the only approach available. As a genre, it is often distinguished by the subject’s formality and unspoken awareness of the photographers’ intentions.  Reportage photography can often produce similar images at first viewing but these are often characterised by ‘stolen’ moments.  In portrait photography, the skill of relating to a stranger in a short space of time and negotiating to take a photograph is no mean feat. It’s a great way to learn photography and requires the right non-verbal approach and both readily available camera technique and composition that need to be subservient to the human interaction.  In most cultures, although I’ve observed by the number of good portraits produced in India, approaching someone for a portrait is quite a challenge. The image to the left taken by Anabel Howard on a photography holiday in Morocco, shows a clear empathetic subject/photographer relationship. Her framing is neutral but this allows the subject’s personality to shine through. Working with an individual who is perhaps wary of being photographed, meant that in her mind she would have have to shoot quickly.  This is not always the case, but subjects can become suspicious or tire if things drag on.  It’s important to  produce enough images to correctly determine the critical focus, which should be on the eyes.

Anabel’s image to the right probably straddles the thin line between portrait and reportage as the subject’s gaze doesn’t readily acknowledge her presence but still there is a clear emphasis on the subject. Her critical focus is spot on, the gentleman’s eyes being crisp and sharp.  It’s easier to achieve this when shooting with a wider focal length lens as there is inherently more Depth of Field(DOF). Compositionally this is a dynamic image that benefits from the unconventional placement of the subject’s head at the centre of the frame.  There is a fondness for tighter cropping in many circles of photography but in this instance I think the headroom allows the subject to breathe.  I also like the inclusion of the man’s hands and these say a lot about his character.  An off camera gaze is also a choice to be exercised by the photographer when shooting.  Ideally it’s good to have a variety of options available for review.  Here the off camera gaze adds another dimension in suggesting the presence of a third person.

To the left is a classically composed portrait with the subject’s eye line one quarter from the top of the frame. Here once again the inclusion of hands add another dimension to the image, in this case a compositional influence, the finger underscoring the subject’s face.  Furthermore the eyes are nice and sharp which is not easy in low light, especially when working with a fully wide Aperture, which in turn reduces the Depth Of Field(DOF).  The photographer in this instance, Dan Stockwell, was working without a tripod at an increased ISO at Shutter Speeds around 1/50. The subject’s twinkle in the eyes is highlighted by turning to face the light source.  When shooting without flash in low light, it’s crucial to ascertain where the principal light source is coming from and to direct the subject accordingly.  The key is not to over direct them, rendering the experience too artificial and making them feel uncomfortable.

To the right is a Portrait of an ‘Argan’ worker taken by Martin Howard near Essaouira using his preferred square format.  The use of a non-rectangular 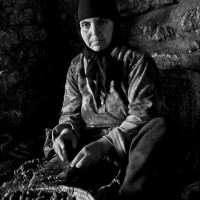 frame for portrait work was epitomised by David Bailey in the 1960’s during his series of celebrity black and white portraits. Bailey at that time also broke with the long held convention of maintaining headroom space above the subject. By cropping tight into the subject’s head, the viewing experience becomes concentrated on the eyes. In Martin’s image (right) the use of Black and White and off camera subject gaze reflect a more traditional representation of women which in this instance connotes unchanging working patterns and attitudes.  Contrast this with the image, below left, taken in the same location by a different photographer.  Here there is a different aesthetic at play and one that feels more contemporary but at the same is more open to interpretation.  Both images work in their own right but it’s important to be aware of image connotations and what as the photographer you want to communicate.

Finally two photos from Sharon Winfield during her time in Essaouira. Both show and reflect the advantages of spending more time with the subject, in this case a two hour workshop.  The subject is clearly at ease with the process and this has allowed Sharon to explore different situations and compositions.  Sometimes the subject can make suggestions with regards to a locational choice.    Note the large Depth Of Field(DOF) at play in the left image.  Whilst not essential to the visual experience, the added reveal of texture from the cannon adds an extra dimension as does the detail in the sky.  Also there is good control of exposure, the clouds passing over the sun helped in this instance. Secondly, the right hand image utilises frame space to the left of where the subject’s gaze is directed.  This is something photographers intuitively embed within their images or indeed something they consciously subvert. It’s something you’ll intuitively pick-up as you learn photography.

This is a sample of images produced during the Portrait Workshops on a ‘learn photography’ holiday in Essaouira.