Salt piles both white and brown, excavation by way of evaporation, the semi arid Morocco desert located basins exposed to the prevailing northerly winds and summer heat. Salt production from the sketchers’ imagination, an environment extremely hostile to life revealing through the frame a kind of atavistic visual austerity. 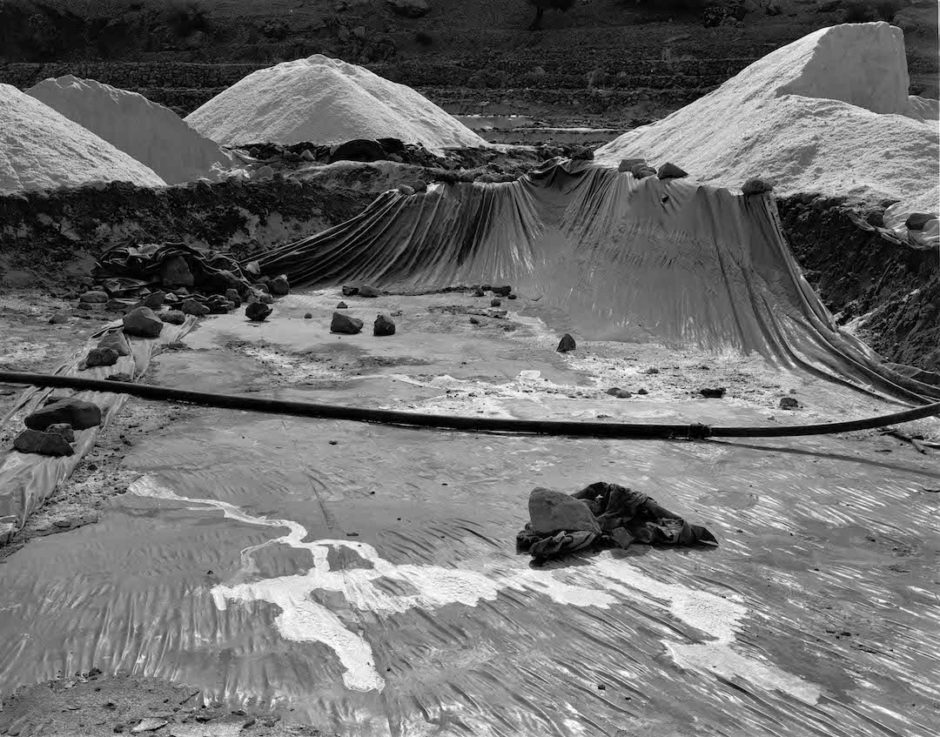 Some 30 years ago I had read about Saharan Salt and the caravans transporting it up from Algeria and Mail into and beyond the Morocco desert. Salt literally worth its weight in gold. I can’t be sure whether I had read or imagined desert towns made entirely from blocks of salt. The notion of such a wild inhospitable place appealed as a location to write about. Many years later, I found myself much closer to the Saharan source of salt, living in Morocco.

The small pockets of Morocco desert salt production located near its western coastline had been on my radar for years but photographically it seemed too unstructured and harsh to make any images there. Set across a few acres, these ad-hoc basins provide a source of income for local families, the men either managing their own small plot or working in a gang to harvest the salt and bag it for the larger pond owners.

Using hand dug wells of 2-3 metres across in some instances and 10 meters deep, water is pumped up from the saline underground water source using old band strap pumps and piped into the plastic sheeted basins using roughly connected plastic tubing. Then nature and the daily sunshine takes its course. Most of the basins have been discarded as small scale set-ups offer little financial return due to the increasing cost of materials to manage the plots. The salt is shipped for fish packing or refined for table salt.

I saw the potential for revealing a chaotic harsh environment seemingly devoid of conventional photographic beauty in graphical terms. It’s austerity in form became ever more appealing to me. Drawn essentially to line and shapes, the puzzle solving was to create mid distance landscapes whilst veering away from images that became too abstract and of course to make sense of the unstructured layout of the land.

A well known photographer once said that they take photographs to later understand what they saw. The image once transfixed offers a hyper real examination of what was in front of the camera. Small details unnoticed at the time become loaded with meaning and prompt a curiosity in the mind of the viewer. This is essentially the draw of the salt basins and the reductive qualities of black and white mean a single stone can take on visual significance.

Photographing in harsh sunlight also became a conscious decision. It’s the foremost lighting in the region and so is more honest to work with this rather than seek the quality of light rarely available and associated with an idealistic romantic appreciation of land. A gritty aesthetic was also paramount, to reflect the nature of the place. Morocco doesn’t lend itself to clean imagery, making the challenge of finding form in chaos ever more difficult.

The more I have visited the locations, the greater sense I have that my personal circumstances influence my interest. At home, rocks surround our house both fashioned in lines to create barriers or heaped in piles awaiting ground clearance. Essentially I live amongst rocks and so the fascination for the fusion point between managed and scruffy finds its place. You can see the full gallery here.

Join us for a desert tour and expand your portfolio with hands on tuition and guidance on how to unlock your creative potential.